Dutch Elm Disease (DED) is one of the most destructive Urban Forest Diseases which affects native Elm species, such as American Elm (Ulmus americana), Cedar Elm (U. crassifiolia), Winged Elm (U. alata), and Slippery Elm (red) (U. rubra). Since its introduction into America from Europe in the 1930s it has been responsible for the destruction of much of the American Elm populations in the Northeast and Midwestern States of the United States and has continued to spread throughout the continental United States where native Elm populations exist. DED is not well known of in Texas although it has probably existed in isolated cases for many years. Recently it has been identified in several North Texas cities, including Flower Mound, Southlake, and North Richland Hills. 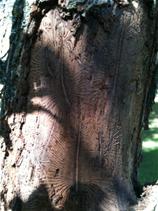 In North Texas, American Elm (Ulmus americana) seems to be the most susceptible to DED. In the North Texas area American Elms naturally exists in the low lying areas surrounding creeks, rivers and undeveloped woodlands. As these areas are developed some of them become prominent landscape trees for subdivisions, homeowners and commercial developments. With the stress that is placed on these trees by the development process they become very susceptible to the invasion of Elm Bark Beetles which are the vector of DED and spread the DED fungal spores from tree to tree. DED is also capable of spreading through natural root grafts between infected trees and healthy trees.

Dutch Elm Disease can be treated with fungicides if recognized very early but in most cases by the time the disease is noticed it has already spread to many parts of the infected tree. Early symptoms typically include yellowing leaves on the tips of branches and then turning brown and curling up, and are generally retained on the branch for some time. This appearance is called "flagging". As the disease progresses, more flags will appear until the whole crown becomes symptomatic. Other diseases such as Bacterial Leaf Scorch and Elm Yellows may present somewhat similar symptoms as DED so it is best to have a sample analyzed by a trained plant pathologist to determine the nature of the disease affecting your tree.

If an Elm tree is diagnosed with DED it is best to take sanitation measures to limit further spread. The trees should be immediately removed and properly destroyed by chipping or burning (where allowed) of the infected tree. It is not recommended that the wood be stored because the Elm Bark Beetles live under the bark of the infected trees and can emerge to carry the DED fungus to healthy Elm trees.

For further information on Dutch Elm Disease please visit the Texas Chapter of the International Society of Arboriculture website.